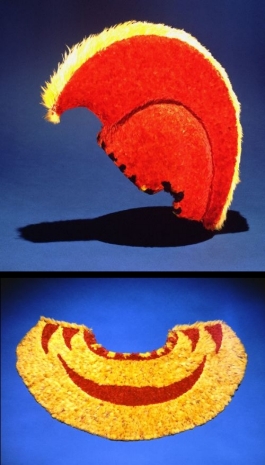 Great Kaua‘i, isle of warriors and land of men ever on the defense.*

With the death of the powerful Māui warrior, Kahekili, and the later victories of Kamehameha over Kahekili’s son Kalanikūpule, the kingdoms of Māui and O‘ahu fell to Kamehameha. Having earlier managed to unite Hawai‘i island under his rule, all that was left to complete the unification of the islands was the acquisition of Kaua‘i. This island however, would prove very difficult to obtain.

Kaumuali‘i had become ruling chief of Kaua‘i upon the death in battle of his father Kā‘eokūlani. Although this famous Kaua‘i chief had been defeated by Kalanikūpule, the battle had taken place on the plains of ‘Ewa on O‘ahu. This meant that Kaumuali‘i was able to retain power at home on Kaua‘i.

There are several versions of the troubles that Kamehameha and his chiefs had in bringing the island of Kaua‘i under his rule. Famous mo‘olelo speak of his massive Peleleu fleet of double-hulled war canoes being turned back mid-channel by a violent storm. Accounts also speak of Kamehameha’s later war plans being set aside by an onslaught of ‘Ōku‘u (perhaps dysentery) that sickened him and killed many of his high chiefs and counselors. Several years passed without this final victory for Kamehameha.

Eventually negotiations succeeded where warfare had failed and an agreement was reached between the two powerful rulers. Kamehameha called for a meeting of the two ali‘i nui. Kaumuali‘i was unsure at first, having remembered Keoua’s fateful death upon going to met his brother Kamehameha at Pu‘ukoholā. He did relent however, and finally met face-to-face with Kamehameha; union was achieved. Kaumuali‘i was gifted with war canoes, ‘ahu‘ula, and other symbols of goodwill. After the death of Kamehameha I, Kaumuali‘i would be brought into the court at Lāhainā and in 1822 was taken by Kamehameha’s wahine Ka‘ahumanu as a husband. He was buried at the sacred mausoleum at Moku‘ula .

This mahi‘ole and ‘ahu‘ula held in the collection of the Bernice Pauahi Bishop Museum are believed to be a gift from Kamehameha I to Kaumuali‘i. The mahi‘ole was preserved in the home of the Reverend Samuel Whitney of Kaua‘i and eventually acquired by the museum. It is the only feather helmet whose former ownership is definitely known.* 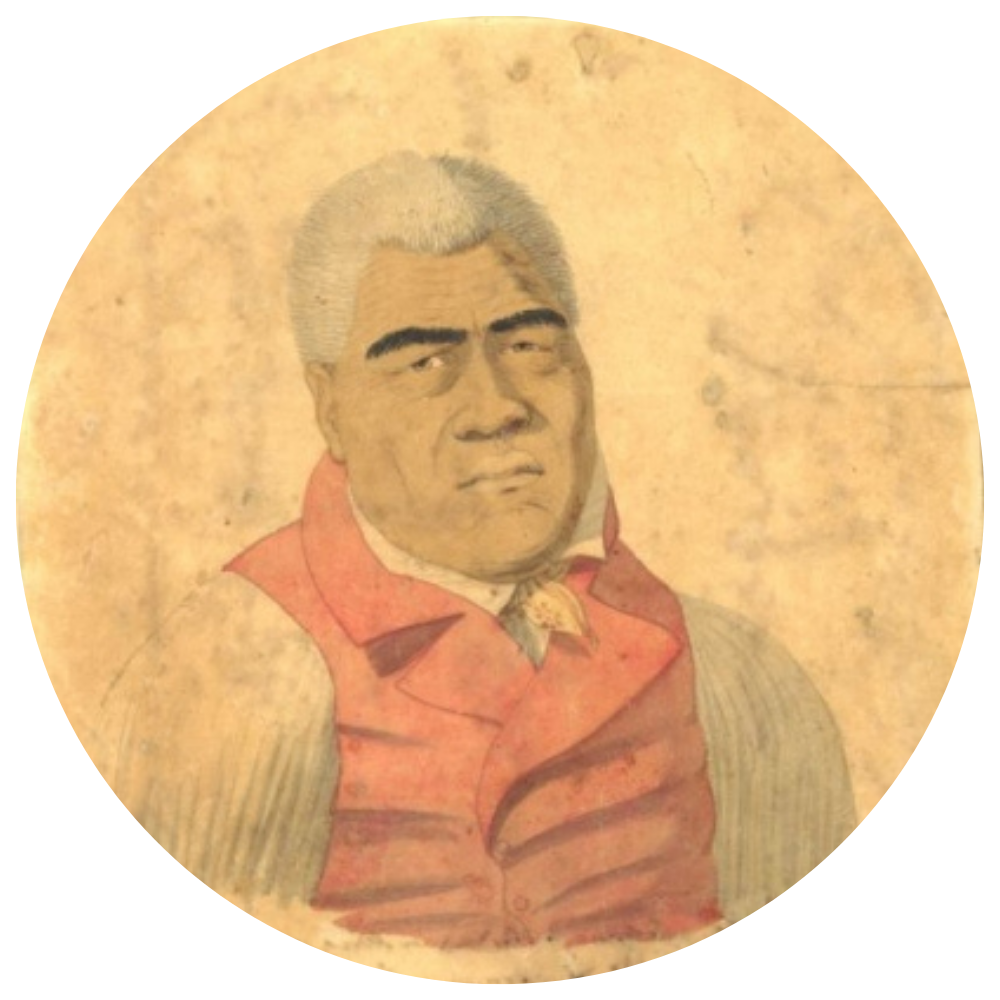 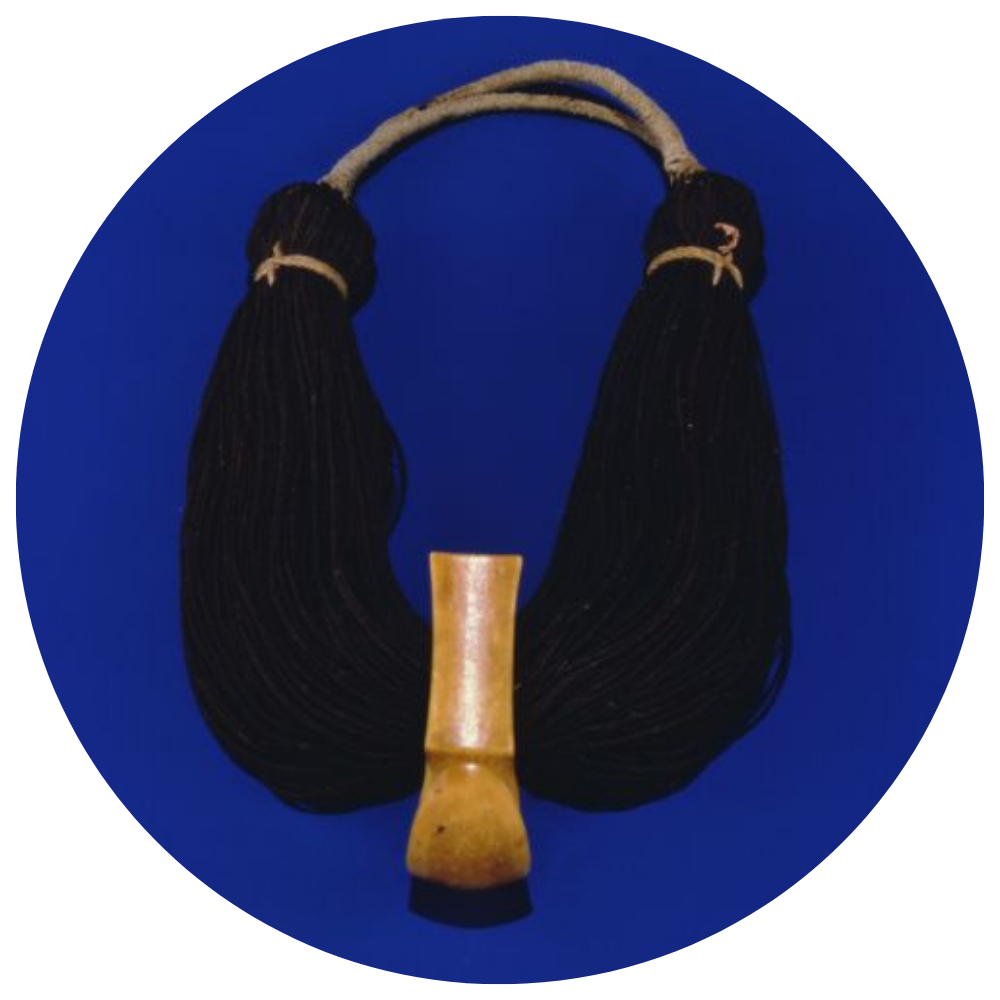 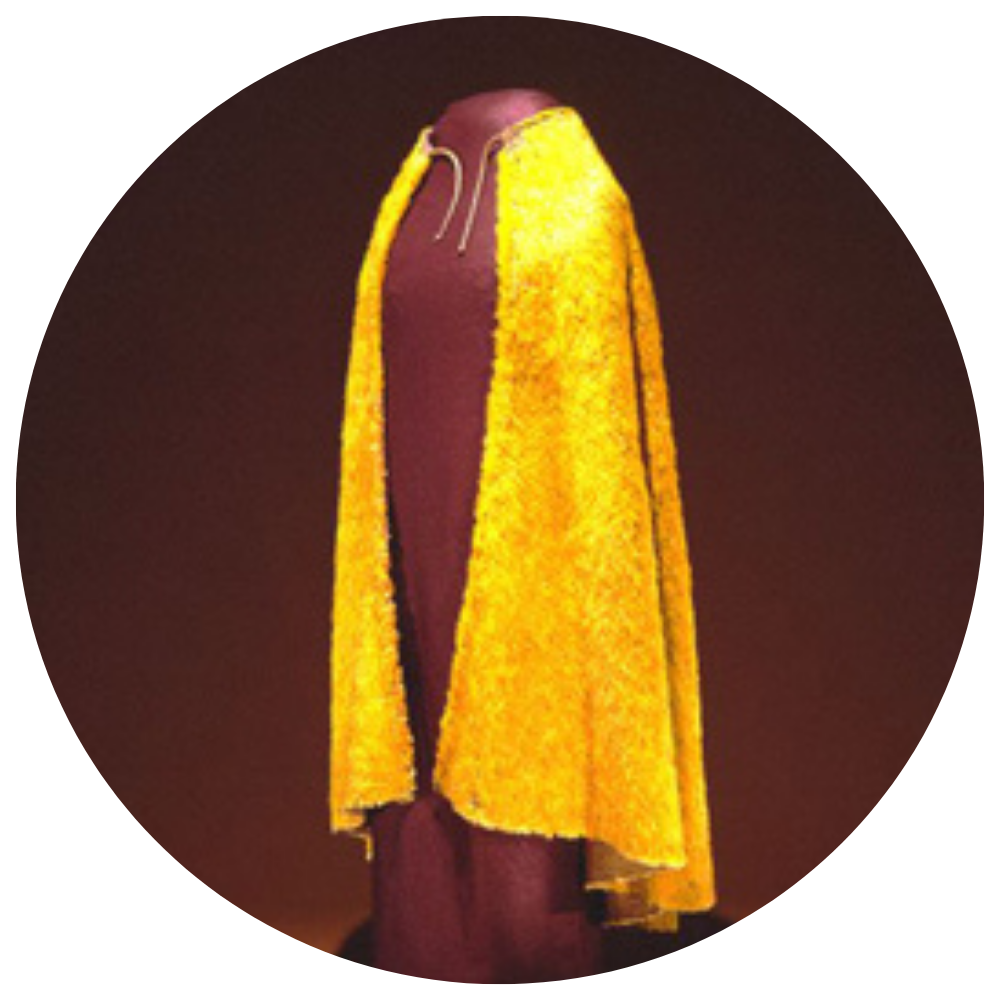 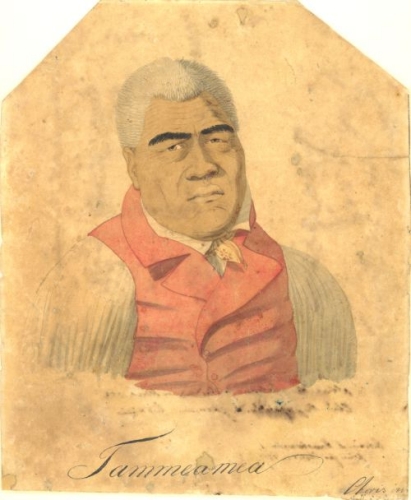 On November 24, 1816, Louis Choris, an artist on a Russian expedition to Hawai`i under the direction of Otto von Kotzebue, painted this portrait of King Kamehameha I clad in a red vest. Earlier that morning, Kamehameha greeted the foreigners dressed in a malo and a black kapa cloak. By the time Kamehameha arrived to the portrait sitting, he changed his attire to “blue trousers, a red waistcoat, a clean white shirt and a necktie of yellow silk.” Choris describes King Kamehameha’s costuming as that of a “sailor.”

By 1816, Kamehameha, in dealing with visitors to Hawai`i, owned numerous garments of foreign origin (including both British and Russian naval uniforms). Could the choice of wearing indigenous attire for greeting the Russian expedition and the subsequent donning of the garment of a “sailor,” have been a purposeful decision or simply a matter of comfort? In either case, Kamehameha’s decision prevented the possibility of slighting the Russian visitors by wearing a British uniform. It also prevented a show of alliance with Russia in the aftermath of the Russian political aggression in Hawai`i enacted by Georg Anton Scheffer.